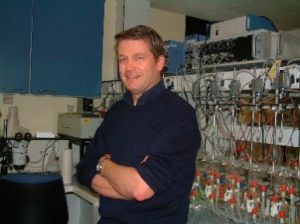 One third of all currently used medicines target G-protein-coupled receptors (GPCRs) belonging to Class 1 or Family A, part of the  ‘druggable genome’. The aim of our research is to understand the role of GPCRs, together with their transmitters in the human cardiovascular system and how these are altered with disease, in particular the consequences of endothelial cell dysfunction, to identify new targets for novel drugs.

The group is unusual in being able to compare responses in diseased versus normal human tissues which can be maintained in organ baths for several hours. Using tissues obtained with ethical approval and informed consent at the time of surgery, we measure responses to chemical messengers such as endothelin-1 (ET-1), novel transmitters or drugs as changes in vascular reactivity or the force of contraction of the heart. We focus on discovering the role in humans of novel ‘orphan’ GPCRs, originally predicted to exist from the human genome but recently paired with their cognate transmitters. Using this approach, we have characterized GPCRs expressed in the human cardiovascular system and identified a novel cardiovacular role for transmitters including apelin,  chemokines and kisspeptins.

The peptide apelin is the endogenous ligand for a novel G-protein coupled receptor with an emerging key role in cardiovascular disease. Apelin is the most potent positive inotropic agent discovered in human hearts, and an endothelium-dependent vasodilators in human vessels (Hypertension).

The apelin signalling pathway is downregulated  in human pulmonary arterial  hypertension (PAH). Animal studies suggest that the development of PAH can be attenuated by infusion of apelin but to date no apelin agonists have been developed for clinical use. We hypothesise that a first in class agonist is required to activate the apelin receptor in PAH to replace the missing peptide. However, a potential limitation of GPCR agonists, is they can desensitise target receptors by recruiting the β-arrestin pathway and internalization (Trends in Pharmacology.)

With Robert Glen (Department of Chemistry, University of Cambridge) we discovered MM07,  a novel cyclical apelin analogue that is biased towards the desirable G-protein pathway but two orders of magnitude less effective at recruiting the β-arrestin pathway and internalization.  In first in human, proof of principle studies,  MM07 was a more efficacious  dilator in human forearm and hand vein via the G-protein mediated pathway than the endogenous peptides. On repeated dosing, there was no evidence of desensitisation. Following systemic infusion in rats a significant increase in cardiac output was observed without any change in heart rate or blood pressure. These results are consistent with MM07 functioning as an agonist biased to the G-protein pathway, with reduced arrestin recruitment and internalization. 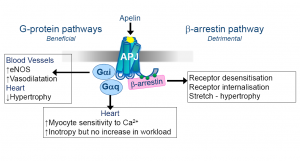 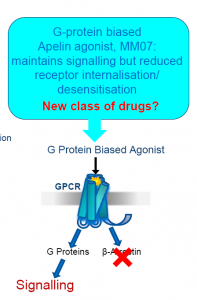 We have demonstrated that G protein over β-arrestin/internalisation bias can be retained in a non-peptide small molecule with drug like properties, CMF-019. CMF-019 caused a significant increase in cardiac contractility in vivo without desensitising the apelin receptor. CMF-019 is suitable as a tool compound and provides the basis for design of biased agonists with improved pharmacokinetics for treatment of cardiovascular conditions such as PAH (Biochemical Pharmacology). 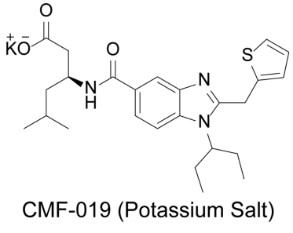 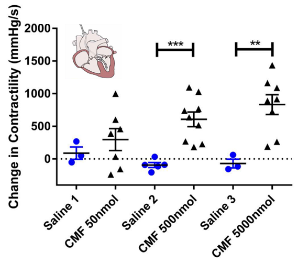 [Pyr1]apelin-13 is the predominant isoform in the human cardiovascular system and is a predicted substrate for angiotensin converting enzyme-2 (ACE-2). Recombinant ACE-2 is a novel therapeutic agent (APN01) in phase II clinical trials for acute lung injury. We have shown that ACE2 cleaves [Pyr1]apelin-13 to [Pyr1]Apelin-131-12 and this cleavage product is expressed in human cardiovascular tissues.  In first in human studies,  we found the metabolite retained the desirable vasodilator  properties of the parent molecule, rather than being inactivated as predicted from studies in animals. These results are important since recombinant ACE-2 in a clinical setting would be expected to convert the native peptide to [Pyr1]Apelin-131-12 but importantly still retain biological activity. (Frontiers in Neuroscience) 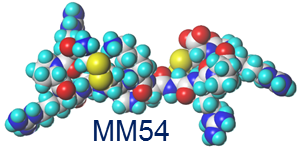 The first competitive apelin receptor antagonist, MM54 was discovered in collaboration with Robert Glen (Department of Chemistry, University of Cambridge (ChemMedChem).  Dr Julie Gavard (University of Nantes) and colleagues, have shown MM54 has remarkable anti-cancer properties in models of glioblastoma. Glioblastoma are highly aggressive brain tumours and are associated with increased levels of apelin.  Despite surgery,  radiation and chemotherapy, outcomes remain poor and there is an unmet need for better therapies. Apelin antagonists appear to suppress endothelial-mediated expansion of glioblastoma patient-derived cells with stem-like properties and suppresses tumour initiation and growth. MM54 increased  the survival of intracranially xenografted mice and was synergistic with the standard of care therapy, temozolomide (Brain, 2017).

We have shown a  new peptide, Elabela/Toddler (ELA),  first identified in the fish Danio as critical for the development of the heart, is also present in the human cardiovascular system

In vivo, ELA increased cardiac contractions visulised below in transverse section by magnetic resonance imaging. Importantly, we found that like apelin, ELA expression was reduced in patients with PAH. However,  daily injections of ELA to replace the missing peptide, attenuated the development  of  PAH in an animal model of this disease, suggesting a potential target for translational research. 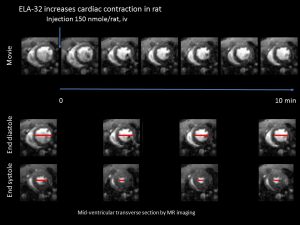 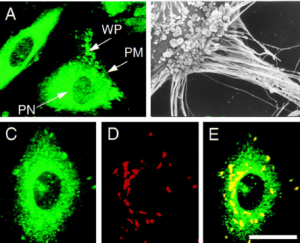 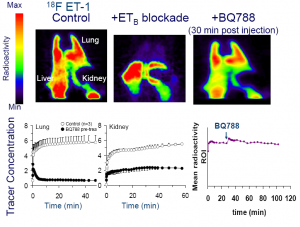 Endothelin-1 (ET-1)  is the principal isoform in the human cardiovascular system ETs mediate their action by activating two G protein-coupled receptors, ETA and ETB. ET-3 is the only isoform that distinguishes between the two receptors, having the same affinity at the ETB receptor as ET-1 but at physiological concentrations, has little or no affinity for the ETA (Pharmacological Review)

We have discovered that ET-1 is unusual among the mammalian bioactive peptides in being released from a dual secretory pathway. The peptide is continuously released from endothelial cells by the constitutive pathway, contributing to the maintenance of vascular tone. ET-1 is also released from endothelial cell-specific storage granules (Weibel-Palade bodies, WP) in response to external physiological, or pathophysiological stimuli producing further vasoconstriction. Thus, ET-1 functions as a locally released, rather than circulating, hormone.  In humans, ETA receptors predominate in the medial layer of vessels but the low density of ETB receptors (<15%) contributes little to vasoconstriction in either normal or importantly, diseased tissue. In human isolated vessels, ETA selective antagonists can fully reverse ET-1 mediated constriction(Circulation Research, 1993,1996,1998,1999,Stroke,1999).

In contrast, in vivo positron emission tomography imaging using the  first 18F-labelled endothelin-1 and 18F-big-endothelin-1 ligands to be synthesized, revealed  the importance of ETB receptors, clearing endothelin-1 from  the circulation thus protecting the heart from detrimental elevated levels of peptide. (BJP,2006,2010). ETB receptors present on endothelial cells mediate the beneficial release of endothelium-derived relaxing factors including nitric oxide and prostanoids. High densities of ETB receptors are present in lung, kidney and liver, where this sub-type functions as a clearing receptor, to internalize and remove ET from the circulation. This differential cellular localization in humans provides the rationale that ETA selective compounds could have a therapeutic benefit by blocking ETA mediated vasoconstriction but sparing ETB mediated vasodilatation and clearing from the circulation. 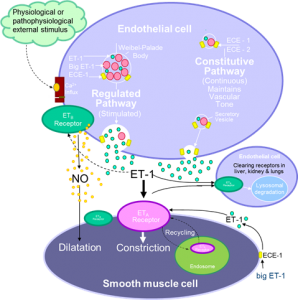 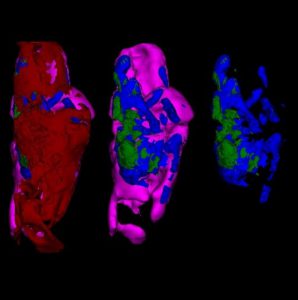 Atherosclerosis (or ‘hardening of the arteries’) is a potentially serious condition where arteries become clogged with one of the key components being deposits  of calcium. In some people, pieces from the calcified artery can break away – if the artery supplies the brain or heart, this can lead to stroke or heart attac. We have shown how a radioactive agent developed in the 1960’s to detect bone cancer can be re-purposed  to highlight the build-up of unstable calcium deposits in arteries. Sodium fluoride tagged with a tiny amount of radioactivity  (18F-NaF),  was infused into patients in the clinic and the progress of the radiotracer  around the body followed using a combined  positron emission tomography(PET)/ computed tomography (CT) scanner to give a three dimensional image of the calcified lesion.  In the same way that  sodium fluoride in toothpaste binds to calcium hydroxyapatite in teeth,  18F-NaF binds to areas of calcification  in  carotid arteries. Following their 18F-NaF  scans, the patients had surgery to remove calcified plaques and the extracted tissue was imaged, this time at higher resolution, using a laboratory PET/CT scanner and an electron microscope. This confirmed that the radiotracer accumulates in areas of active, unstable calcification whilst avoiding surrounding tissue. Sodium fluoride is a simple and inexpensive radiotracer that that has the potential to revolutionise the detection of dangerous calcium in the arteries of the heart and brain  and to make current treatments more effective by giving them to those patients at highest risk. 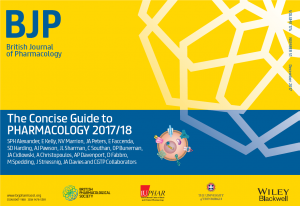 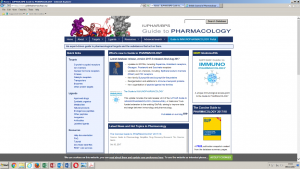 This exciting programme is a new initiative for scientists  to carry out cross-disciplinary cardiovascular research, combining  training in molecular and cellular biology, physiology of model organisms, human pharmacology physiology, genetics, genomics and population health sciences. The programme will operate with a 1+3 year structure. In the first year students will undertake three rotation projects to provide training in a broad range of scientific disciplines and techniques. In years 2-4, students will undertake a 3 year PhD project with a selected supervisor, strong encouragement being be given to the development of collaborative interdisciplinary reserach.

Applications open in the autumn with a closing date in early December. Further information can be found at: https://www.cardiovascular.cam.ac.uk/students/prospective/phd-bhfcardio/apply

Applications open in the autumn with a closing date in early January. Further information can be found at: